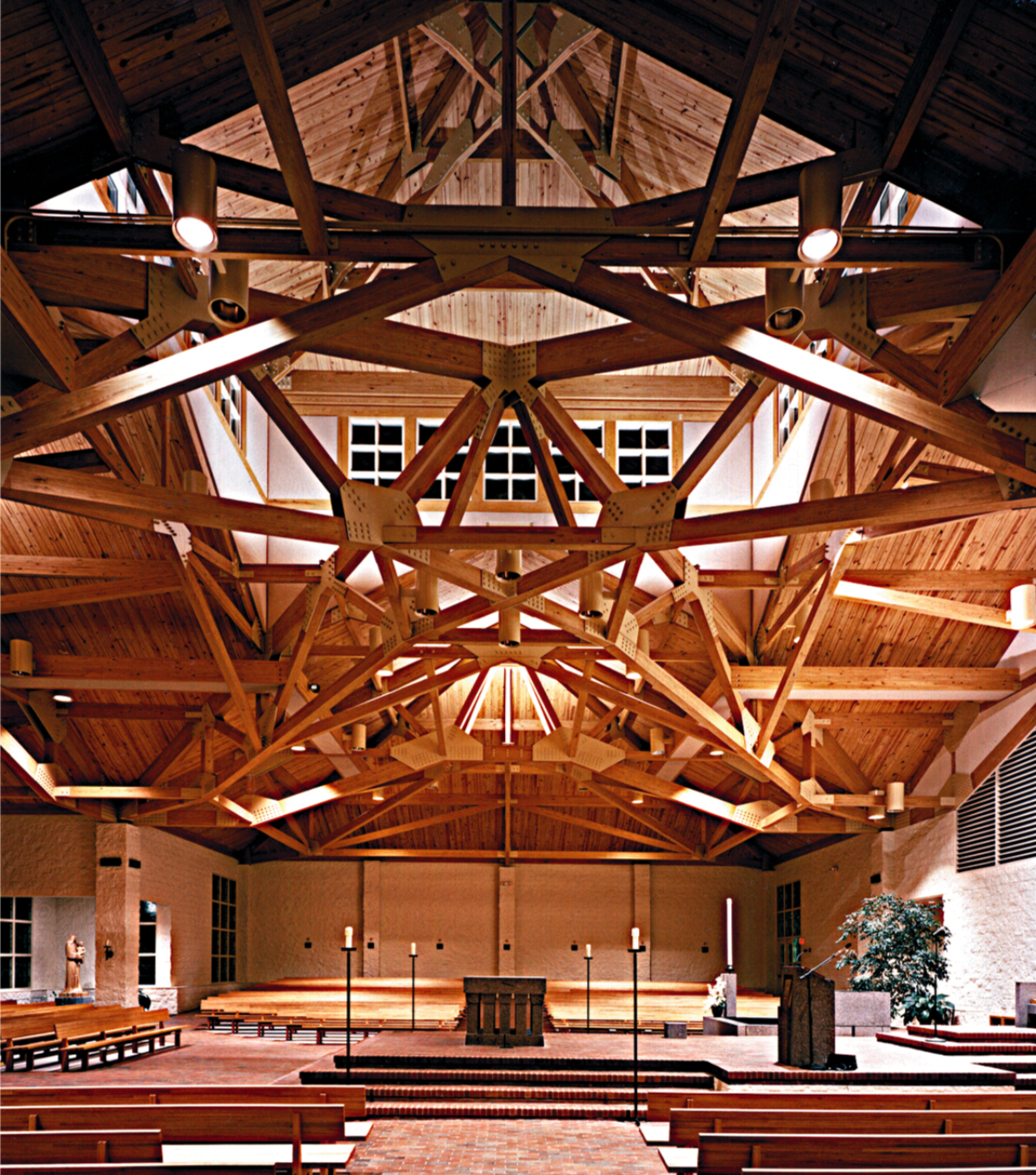 The design of St. Francis of Assisi Catholic Church supports traditional choral music and organ but with limited reverberation and a distributed sound system to provide clear and comfortable speech.

The ceiling is thick wood boards and the walls are primarily split-face block with both surfaces well sealed.  Much of the block is also filled with mortar to limit bass absorption.  The floor is brick except for carpet under the seating areas.  The pews are not upholstered in keeping with Franciscan principles, but have open areas to allow sound to pass through to carpet below to limit reverberation when the pews are not occupied.  All floor areas except under the pews are brick.  Since the carpet is primarily a high frequency absorber, some absorption tuned to the 250-500 Hz range was constructed using quarter-inch pegboard over two inches of fiberglass.  This was mounted on both the top and bottom of a horizontal board two feet wide between two beams over each seating area.    It had more effect than expected. A blue cloth stretched between these beams also concealed the loudspeakers.  Additional two-inch wall panel is located in the “lantern” area that extends up from the roof to allow in natural light.  The gathering space just outside the nave has a highly absorptive fiberglass ceiling and carpet to limit noise in the area.

An electronic organ replaced the initially planned pipe organ due to budget.  Primary organ speakers are centrally located behind the altar.  The plan of the room initially had the choir and organ console located appropriately for acoustics near the altar.  Late in the design process, the local diocese ruled that this could not be done since it placed the musical elements between worshipers and the altar.  Moving the choir and organ console to a corner placed them farther than desirable from the organ speakers.  An organ monitor speaker was placed near this music area to assist the musicians.  This has worked well.  The primary concern was that those sitting directly across the room on the other side of the altar might perceive a delay between the choir and organ.  This has not been a problem.

The church is in the flight path of Raleigh Durham International Airport which required some effort to limit aircraft noise intrusion.  Budget and design constraints limited efforts, but introduction of quieter aircraft has reduced the noise intrusions.

Ventilation is provided by several small systems.  Sound power for these was estimated.  Most supply air is provided through unlined underground round duct.  Fan noise was silenced with plenums where space permitted and thick lining where possible.  Some ducts that were to have four-inch lining were constructed with one-inch lining.  Fan noise silencing was still successful, but the lack of lining in the underground supply ducts led to some greater than desirable mid-frequency flow noise.

The audio system is designed to provide both reinforcement of speech and singing from the chancel and amplification of choir instruments and voices.

The main system loudspeakers are located in beams that longitudinally span each congregational seating area.  Drivers are 12” coaxial systems with a nominal 100°x 100° coverage angle.  The loudspeakers are divided into three zones for synchronizing the signal delay with the natural sound from the chancel.  The over choir area loudspeaker is also a separate zone to allow the choir microphones to be muted to the over choir loudspeakers.